In Part 1 of this article, I talked about one of my favorite chapters in Melinda Gates' book, The Moment of Lift, which dealt with the silent inequality of unpaid work. It opened with a story of Champa, a 22-year old mother in tribal India living with her husband, three children, and in-laws. Her two-year-old daughter was suffering from acute severe malnutrition, which the health workers explained, would be fatal unless a special diet and treatment were administered at the center immediately. Even if she wanted to take her sick daughter to the center for treatment, she couldn’t. She was forbidden by her father-in-law who told the health workers, "Champa cannot go. Being away for two weeks is out of the question. She has to stay and cook for the family! If God takes away one child, he always gives another one. God is very great and generous in this respect."

The not so obvious Champas around the world

Believe it or not, many women all over the world share similar stories with Champa. The injustice of unpaid work also exists in not so obvious places. Unpaid work, defined as work performed at home like childcare, other forms of caregiving, cooking, cleaning, errands done by a family member who is not being paid, can kill women’s dreams. 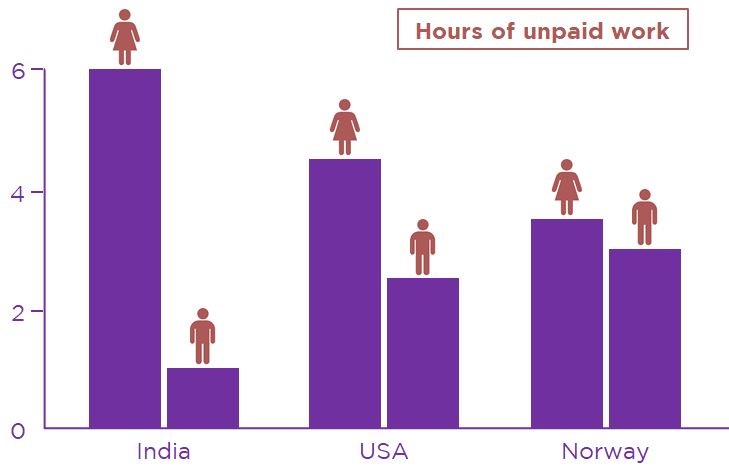 According to the Bill and Melinda Gates Foundation data, women around the world spend twice as many hours as men on unpaid work, and the disparity varies across countries. Here’s a partial list.

India - 6 hours for women vs. less than 1 hour for men

There is no country without a gap. If you compute the average hours, this means that women do seven years more of unpaid work than men over their lifetimes. That’s about the time it takes to complete a bachelor’s and a master’s degree!

The story of this disparity of unpaid work starts not just upon marriage but as early as growing up years when daughters are expected to do more household chores at home while their brothers are given more time to study and play.

The effect of allowing this unpaid work of women go on in our own society might not have that dramatic effect as Champa’s story but it remains a dream-killer for women, and unnecessary cause of conflict between spouses and siblings.

For a long time, economists didn’t recognize “women’s work” (housework, childrearing, etc.) in assessing the value of the economy. They just counted the number of hours spent on the farm and other “work place” (of course, work outside the home).  Then when women entered the formal workforce, they were still the ones expected to do most, if not all, the unpaid work at home.

Marilyn Waring was the economist and young New Zealand Parliament official who published the book entitled If Women Counted: A New Feminist Economics in 1988. She discussed the issue of unpaid work of women and brought attention to this injustice. The effect: The UN resolution to count women’s unpaid labor whose original implementation date was still many years down the road was moved up to 1995.

Another economist Diane Elson came up with a three-part framework to shrink the gap between the time men spend on unpaid work and the time women spend on it. It’s called the 3Rs: Recognize, Reduce, Redistribute

I hope all you women, whether married or not, are now incorporating the 3Rs in order to shrink the gap that exists in your own homes. Come to think of it, this is not just present between husband and wife, or father and mother on child-rearing, it also exists among brothers and sisters when the latter are the ones expected to take care of aging parents. And don’t forget, these sisters were the ones who already did more unpaid work at home during their growing up years.

In the Filipino setting, this may be an awkward thing to bring up where you are prone to be accused of walang utang na loob, nagbibilangan, and all those other guilt-inducing remarks. But, they have to be discussed in the light of the 3Rs which will eventually be for the common good.

The importance of money in women empowerment

All these bring us back to the importance of women being good with money. In the many cases of women abuse, money almost always plays an important role. How many sad stories do we hear of women enduring pain, both physical and emotional, just because of the lack of money?

One of the most memorable lines from Melinda’s book is this: Poverty is the most disempowering force on earth!

This is the reason why I am excited to teach women and help them have a high FQ!

This is why this partnership with Insular Life has been a highlight of my career. I have lived a life not marred by money issues despite not being born to a rich family. I was just lucky that I was raised by a woman who knew her money values and imparted them to her children. I was lucky to be educated and allowed to pursue my career, as much as my brother was. I was also lucky that I married someone who supported me when I decided to quit my job and never made me feel inferior just because I was no longer an income contributor. I was lucky that I thought of ways to continue treating my family contribution of raising our sons and keeping our home, including keeping a strict accounting of family expenses and investments, real work. That’s true, my sons would ask, “Ma, are you busy with work?” when they saw me busy with budgeting, doing our family albums, and other chores.

I didn’t need to ask for an accounting of the value of my unpaid work because it was highly recognized and very much appreciated.

All of these plus my continuing education in the realm of money and family are what I bring to this important campaign to empower women.

I hope you have learned from the articles I’ve written, videos we made, workshops we held to empower you.

Take the FQ Test now to start your empowerment! Are You And Your Partner Financially Compatible?